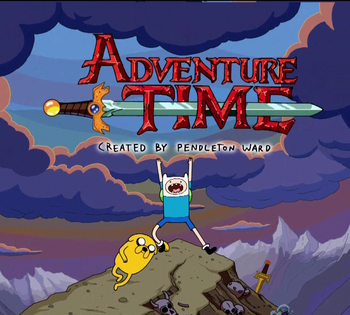 Adventure Time with Finn & Jake is a cartoon from Cartoon Network and Frederator Studios about the adventures of Finn, a 14-year-old human boy, and his best friend Jake, a dog with magical powers to change shape and grow and shrink at will.

The show is set in a fictional continent called the "Land of Ooo", in a post-apocalyptic future about a thousand years after the "Great Mushroom War". According to Pendleton Ward, the show's creator, the show takes place "after the bombs have fallen and magic has come back into the world". Before the series was fully developed, Ward's original intention was for the Land of Ooo to simply be "magical". After "Business Time" aired, in which an iceberg containing reanimated business men floats to the surface of a lake, the show suddenly became post-apocalyptic

The Land of Ooo is colorful and full of delightfully strange people who are, for the most part, made of food item (nuts, candy, hot dogs, etc.) - although, there are many types of humanoids, intelligent animals, and living other forms of living objects, like the Pillow People. Despite its cartoony nature and appearance, the world is full nasty monsters, dangerous environments, and even deadly weather! In the case of weather, there is a rare phenomenon called a "knife storm" where daggers rain down from the sky, with blades aim downwards. 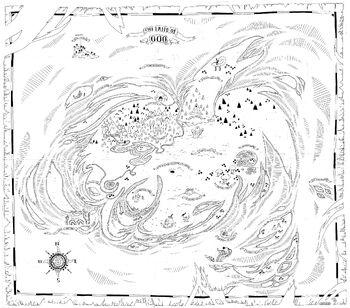 Where Ooo is ether a large island or small continent, the rest of the world is Earth-like, save for two or three large chunks blasted from the surface. The landmass of Ooo from the sky resembles a fiery phoenix. The Land of Ooo and the Earth has been seen within the cartoon. Adventures have taken place off-world, including planet Mars ruled by their immortal King Abraham Lincoln, and Multiverse where at the center, the Time Room can make alternate timelines and realities based on the type of wish you make to the omnipotent pink two-dimensional being called Prismo. The Land of Ooo also has a gender-swapped counterpart fans call the Land of Aaa. As far as anyone form Ooo is concerned, this world, and the characters therein are but the mad ramblings of the Ice King's insane fan-fic. Given the presence of the Multiverse, and the Ice King's wizard eyes (which allows him to see things other people cannot see, but most people think that they are just products of his insanity), there might be some truth to his story.

Where many people who are not into animated programing would see this on the surface as a simple kid's cartoon, it is a show with well written characters and stories, that plays around with ambivalence (conflicting emotions) and nostalgia - not so much with cultural references like with The Regular Show, but with the portrayal of Finn as a relatable/believable young man coming of age. The cartoony look and lack of strong violence may masks a lot of the dangers and horror elements, but it still maintains a strong sense of dread and suspense. This fiction is not meant to be taken seriously, as it is a world of strange wonders with adventures that could happen for unlikely reasons.

There are many mutant & magical races in adventure time, but here are the most well known are presented here:

You can see more here

Before 2016, all RPGs set to the Adventure time setting were the work of fans. However, in 2016 an adventure time tabletop rpg was announced. As highlighted in the external links below, there have been a number of attempts to make unofficial pen and paper RPG rule sets or source books. Here, fans are welcome to create their own conversions using the Mutant Future rules.

Retrieved from "https://mutant-future.fandom.com/wiki/Adventure_Time?oldid=5813"
Community content is available under CC-BY-SA unless otherwise noted.