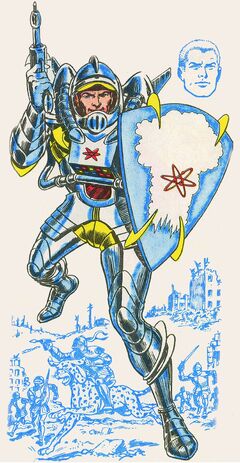 The Atomic Knights was a comicbook series that first appeared in every third issue of Strange Adventures in the early 1960s, beginning with #117 (June 1960) and running through #160 (January 1964). In all there were 15 early-1960s Atomic Knights stories created by writer John Broome and artist Murphy Anderson; they were a band of heroes living in and protecting the post-apocalyptic future of 1992. The 15 Atomic Knights stories in Strange Adventures took place in 'real time' (three months usually passed between the events of each story as well as in the real world) and generally dealt with post-holocaust recovery, as the Knights would fend off menaces and attempt to rebuild the area around their homebase of Durvale, though they also managed to travel to Los Angeles, Detroit, New Orleans, New York, and Washington, D.C.

Following the catastrophic Hydrogen War of 1986 (World War III), a petty tyrant named the Black Baron ruled a small section of the American midwest with an iron fist. He was opposed by former solider Sgt. Gardner Grayle and the Atomic Knights, who wore medieval suits of armor that were impervious to the Baron's energy weapons — namely R-Grenades and Raguns (radiation guns) — the armor having been irradiated in the war. The other Knights were twins Wayne and Hollis Hobard, Bryndon Smith, the last scientist left on Earth, former school teacher Douglas Herald, and his sister Marene Herald.

The atomic war lasted a mere twenty days. As a result of its aftermath all plant life and animals were destroyed. There was no functioning governments or rules of law and the shapes of the continents were changed. The only food left behind was what was left in storehouses.

The following list of gear and stats are for the sake of recreating the team, or a similar group. Members of the Atomic Knights are equipped with the following gear:

Notes on Other Weapons and Technology

For the most part, technology from before the war are still fairly modern (from a '60s prospective), with some high-tech advancements to account for developments that would have happen by the '80s (without the real world equivalents). In other words, modern technology (cars, firearms, etc.) would be way more common then advanced technology. Any basic weapon or armor that requires metalworking would be ether crud implements or museum pieces.

Raguns (radiation guns) are basically Radiation Rifles as outlined in the rulebook.

R-Grenades are small dirty bombs. They explode like a Nerve Gas Grenade, but the grenade emits a cloud of Class 2-5 (1d4+1) Radiation.

Making the Setting Your Own

If you wish to emulate the later versions of the Atomic Knights where they wear high-tech armor, but still live in a post-apocalyptic future, while being less specific, then use the following gear:

It this case, the level of technology improved enough for there to be high-tech equipment available to military personnel. The Atomic Knights would have their old (or recovered) military issued hardware. Naturally, there would be others with the same equipment, and this in turn could create a new feudal era in the ashes of atomic war.

In a setting based on the Atomic Knights, the (pure human) heroes would sport advanced armor, if not powered armor. The latter was done in a fourth edition Gamma World supplement called Gamma Knights. Powered armor would be to heavy to use with normal mounts. Horse-like robots or combat bikes made to look like beasts would be better alternative.