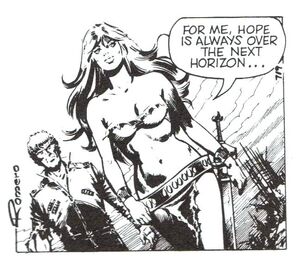 Axa is a British comic strip that ran from 1978 to 1986. It was drawn by Romero, with Donne Avenell as the original writer, and Chuck Dixon as a replacement writer when it was published under Eclipse Comics. This line of comic is highlighted by gratuitous, but tasteful nudity (its not unusual for her to lose her top, then recover it later).

Despite the cheeky, cheesecake nature of the Axa comic, it is, at its core the embodiment of the '60s-'70s sexual revolution within a world stuck in a conservative, semi-barbaric state, with Axa fighting those in power with ideas of personal freedom and pleasure.

Set on a post-apocalyptic Earth in the year 2080 A.D., a discontented "Woman of the Dome" left the comforts and safety of her domed city to explore the wild and barbaric world. A hundred years ago a nuclear and biological warfare called "The Great Contamination" knock the Earth off it's axis, destroyed civilization, and mutated people and wildlife. Most of the people Axa encounters live within communities that are based around exaggerated ideas and life-styes, where she gets caught-up in their ways, only to escape or undermine what they are. Most of the mutants encountered (which there is not a lot of) are typically giant-sized versions of mundane animals, or deformed humans. There are some places so altered by the disaster, that they harbor an ecosystem of mutant dinosaurs.

This is a toned-down version of Mutant Future as the comics focused on social-commentary, but Mutant Lords (GMs) are free to make changes as they see fit.

This dome-covered city in inhabited by a race of sheltered, self-obsessed people. They live a life of pleasure and comfort, but they are highly regimented, with few personal liberties. An old man called The Director runs the city. The city has flying cars called "Mini-Cruisers," robot servants, and a wide range of technology one would find in a spaceship. They have a good understanding of technology, but they might not know how they work.

(as PCs, they are like Pure Humans, but have no benefits save for the better INT; they use d6 for their Hit Dice, otherwise as NPCs, they are treated as Eloi)

The Ruined City of the Middle People

The Middle People are a semi-barbaric race who maintain a Cargo Cult around the ways of the "old people" — modern middle-class society — and they maintain distorted dogmas based on the standards and life-styles from the past. They worship television sets as "The Holy-Box", believing the Old People received divine messages through them, and they treat living rooms as holy temples. There are no compassion among them, and a strong sense of conformity. They are regimented by strict gender-roles. Sexual passion is frowned upon, with extramarital relationships being dealt with by extreme hostility. They are lead by a chieftain called a "May-Or".

This can be expanded upon with dark representations of modern Neighborhood Watch and Homeowners Associations, and bigotry going far beyond misogyny.

(they are treated as Pure Humans)

The Ruined City of the Mutants

The Mutants are a semi-barbaric race of disfigured humans, who are obsessed with purifying their damaged gene-pool. They do this by stealing women from the Middle People. Like the Middle Men, their need for a strong population leaves no room for passion. Unlike the Middle Men, they are not driven by the ideals of the past.

(they are presented in the comics as Mutants Humans with Albinism and/or Bizarre Appearance, but a GM can treat PC and named NPCs as Mutant Humans under the normal rules)

This small island is a hold-out for a remnant of a bygone era. A family of Millionaires and their servants took refuge in this island before "The Great Contamination," with plenty of supplies to wait-out the disaster. Unfortunately these supplies are dwindling, their equipment are falling apart, and are not enough young people — just a young man, and a number of old folk — to continue a future population. They are highly xenophobic, unless they are visited by a young woman, in which case, they would try to marry her to their the heir of the Arkady Estates: Jason Arkady. Ever since Jason left with Axa, the islanders have nothing more to do but wither away.

Surfers are a race of aquatic humans with webbed fingers, shark-fins on their back, and the ability to stay underwater for an extended time. They live like beach-bums, and they have a tendency to pull people under if they see them as a threat. They share an island with the man-slaves of the Undersea Dome, but its likely that they are a nomadic people, who use the island as a rest stop.

This is an underwater dome that was established by a militant feminist who built the city under her one-sided ideology. As a Result, women live in the city as supreme rules, while the man dwell in the sea caves as slave labor. They are ruled by Queen Leonore.

Since advent of Axa, there was a slave revolt and the Queen tried to destroy the city out of desperation. In the end, both sides where forced to treat each other as equals.

Hidden in a frozen wasteland, their is a primeval jungle-like swampland inhabited by dinosaurs. At the edge of the valley, primitives dwell in caves and struggle to survive. At the center of the swamp live a race of highly advanced inventors, who live in the City in the Swamp, and relay on robots to survive. Because they are so use to dealing with machines, they mostly forgot to deal with other people. The primitive cave-dweller and the scientists of the City in the Swamp are at total opposites at everything, and are generally hostile towards each other.

The City of Hope is the home of Nero's Palace; an old casino in Las Vegas, that is controlled by Mister Nero. This city is considered a holy site that attracts people from afar, and has a reputation for granting wealth, happiness and prosperity. The truth is, people come with with what meager obsessions they have, loose it while gambling, and if they go bankrupt, they can get a loan for more chips. If they cannot repay the money, they are sent to the gladiatorial arena, where they face wild animals or are chased by cars and bike, fitted with spinning blades. It is rare for anyone to survive, much less to come out unhurt. As such, bets are made to see how long they live. The main events are usually fights between professional Gladiators, like Dirk.

After the defeat of Mister Nero by Axa, Jason Arkady — who's ancestor co-owed before Nero's Palace "The Great Contamination" — took over the establishment.

The creatures are obvious enough to make Mutant Future (or equivalent) stats on your own. There are some sample creatures found in the comics:

Jellyfish-Crab. They attack in packs.

Giant Mutant Spider with crab-claws. They are lone creatures. 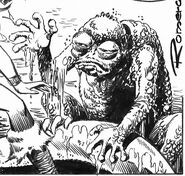 Mutated people from the old city slums. They are called "Toads."