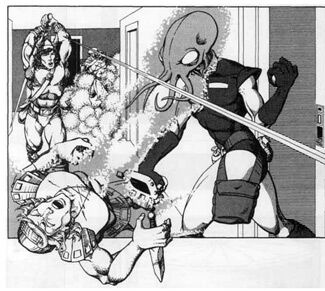 The Brain Lasher (also known as Mind Flayers) is a sinister humanoid alien. Its head resembles an octopus, with a round mouth lined with four large suckered tentacles, and four small, slime dripping tentacles. Its lanky body is humanoid, but it has four fingers on each hand, all of the same approximate size with no distinguishable thumb. The tips of its fingers have retractable, hollow claw-like talons. It wears clothing, but its visible hide reveals metallic green and copper colored, swirling patterned slimy skin.

Brain Lashers are very intelligent and have powerful minds. They will often attack by stealth and subterfuge rather than full out assault. They will try to capture their enemy with henchmen, instead of intervening outright. If they intervene, they prefer to soften threats with mental attacks, before they close in by grasping the opponent’s heads. Once grasped, the hollow claws will puncture the skull in a few seconds, and instantly suction the victim’s brain into accessory stomachs within the Brain Lasher’s forearms. Once the slimy probes reach the brain, the victim is instantly killed, and the Brain Lasher will have all the victim's knowledge and memories. They may retain some key details (usually stuff that will give them a tactical edge), but much of it (typically the mundane things that are of no importance) will go away after 24-hours.

It is rumored that Brain Bashers come from some other, distant world, which may not be impossible due to their ability to plane shift. Others have said that Brain Lashers have control of alien technologies, which they wield to further their goals of domination, power, and enslavement.

Brain Lashers are usually loners, and they do not operate in large numbers unless motivated by a common cause - such unions rarely last, as they are constantly scheming for power. They prefer to live deep in the depths of the earth, often occupying dangerous underground ruins or deep, expansive caves. They will usually have a bond of Homo erectus slaves - usually about 30 - which they create from humans with ancestral form, and breed as slaves for excavating their dwellings and using for other unspeakable tastes.

As aliens, they live in spaceships or high-tech bases, and they make use of alien technology. They use ancestral form and genetic manipulation to spawn strange creatures or even living instruments.

Brain Lasher as a Playable Race

Brain Lashers are very intelligent and have high willpower (+3 for both; 21 maximum). They have 1d6 Hit Points per point of Constitution. They have a special physical attack:

It should be noted that they have no sense of sympathy or humanity - such things are alien to their mental physiology - and as such, they treat everyone else as things or tools to their own ends. They are usually Chaotic, and sometimes Neutral, but never Lawful. Given their sinister nature and diabolical schemes, they are feared and not trusted. They take a +3 penalty to all reaction rolls.