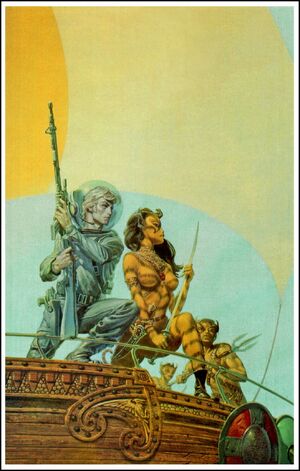 Felinoids are a race of bipedal humanoid cats. They came in a wide variety - from the common Felinoid based on domestic house cats, to the larger breads based on giant feral cats. There are five known types of Felinoids: Basic Felinoids, Pantheroids, Tigrisoids, Saber-fanged Tigrisoid, and Leoids.

Felinoid, Typical (cat-men) are 3’ tall bipedal mutant domestic cats are the most common breed of Felinoid. They are typically found in or around human or humanoid communities, as they prefer the safety of a settlement then the wilderness. They are loved by some people, and hated by others. They have a tendency to be thieves, and love to spread gossip. To other, larger Felinoids, they are seen as pests at best: food at worst!

Pantheroid (panther-men) are 6’ tall bipedal mutant panthers. They are quiet and stealthy, not given to smalltalk. They tend to be loners, and are prideful and aloof.

Tigrisoid (tiger-men) are 7’ tall bipedal mutant tigers that hunt the wastelands, preferring the taste of mutant human and pure human meat. They are feared and heated by other intelligent beings.

Leoid (lion-men) are 6’ tall bipedal mutant lions tend to travel in prides led by a dominant male who has a flame orange mane. Leoids are fascinated by pure humans, and will usually avoid attacking them unless threatened first. They have been known to capture them merely to study pure humans out of curiosity, often shrinking them with density alteration (others) to make them convenient play toys. Leoids will restore them to full size and turn them free after several days.

All Felinoids roll 1d6 per point of Constitution for Hit Points. All Felinoids have: natural weapons (2 claws and bite), increased hearing & smell, night vision, increased balance, and what mutations is listed on each sup-type.

Felinoid, Typical: They tend to be roguish. Their natural weapons are: 2 claws (1d4 each) and bite (1d6). They have: dwarfism and 1d4 mental mutations.

Pantheroid: They are usually prideful and aloof. Their natural weapons are: 2 claws (1d4 each) and bite (1d8). They have: chameleon epidermis and 1d4 mental mutations.

Tigrisoid: They are usually cunning and cruel. Their natural weapons are: 2 claws (1d6 each) and bite (2d6). They have: thermal vision, damage turning, vampiric field, plus 1d3-1 extra mental mutations.

Saber-fanged Tigrisoid: They usually act like loud, obnoxious wrestlers. Their natural weapons are: 2 claws (1d8 each) and bite (2d8). They have: gigantism and 1d4 mental mutations.

Leoid: They are usually kind, even if their playful nature gets ahead of them. Their natural weapons are: 2 claws (1d4+1 each) and bite (1d8). They have: empathy, density alteration (others), plus 1d3-1 extra mental mutations.

Retrieved from "https://mutant-future.fandom.com/wiki/Felinoid?oldid=5913"
Community content is available under CC-BY-SA unless otherwise noted.