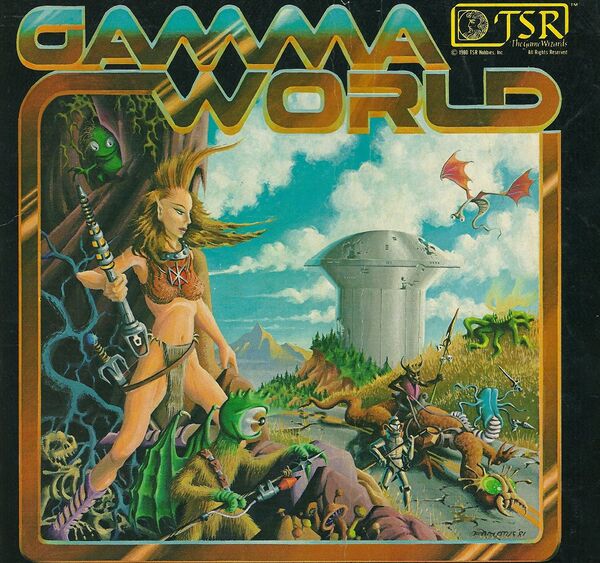 Gamma World is a science fantasy role-playing game, originally designed by James M. Ward and Gary Jaquet, and first published by TSR in 1978. It borrowed heavily from James M. Ward's earlier product, Metamorphosis Alpha. Thus far, there have been 7 editions.

The details provided change from version to version, but from the beginning, Gamma World takes place in the mid-25th century, more than a century after a nuclear war had decimated human civilization.

In the early editions, humanity achieved in creating a high-tech utopia that effectively ended human suffering and reversed man-made pollution. Without the daily struggles of life, mankind focused on politics, and eventually became galvanized in their own views; to the point of fanaticism and terrorism! With the world falling apart to bloody conflict, a fanatical group called "The Apocalypse" tried to force world peace by threatening the world with total annihilation! Their plan of absolution was not that absolute, as the world still survived, but a bit... altered. The aftermath resulted in the fall of civilization, and a state of Darwinism unleashed!

Early on, the setting was focused on finding the long-lost treasures of the fabled Apocalypse Base, but in truth, the setting was open-ended enough for a wide range of adventures. The remnants of civilization are primitive and xenophobic. Some people from into secret societies called Cryptic Alliances. Bound by common philosophies, they operate in the shadows of civilization in order the fulfill their mysterious agendas. With each edition, the Cryptic Alliances became larger, more well-known, and even more tied to the rules and setting. Eventually, it reached a point a to where they control large areas across North America, becoming governments by their own right.

(see Barony of Horn for more information on that location)

The 1978 first edition rule set was based on an unproduced game called Munant, and was further developed by Ward and Jaquet. Attributes are rolled like D&D Abilities, but Strength is called Physical Strength, and Wisdom is called Mental Strength. The playable races are Pure Strain Human (PSH), Humanoids, and Mutant Animals. There are no character classes. It did have a crude advancement system that granted ether an attribute boost or a bonus to combat (number of attacks per round, to-hit bonus, or bonus damage die with melee weapons). This was an optional rule, and was most likely a tacked-on feature. Hit Points are rolled based on ones Constitution score and always uses a d6. Initiative is unrolled and based on one's Dexterity score; the higher the score, the faster one is. The ability to hit was based on Weapon Class: An abstract system that groups weapon types into to-hit arrays, and was not entirely a measurement of weapon strength.

For the most part, the game mechanics were rather piecemeal and required a bit of tweaking to make it work in places.

The game came in a box set containing a 58-page softcover rulebook (with a black and white cover) and a fold-out map of a radically altered North America with no locations listed.

This edition had three accessories:

The 1983 second edition rule set was a major upgrade to the first edition game. Beyond a lot of superficial indexing and rule clarifications, the combat rules are more complete, and there are a number a newer features. The races are more defined in capability, and mutations have listed Attributes rolls. This game also introduced Tech Levels to help grade items and people by technological development. The book also includes a list of common survival gear, more setting details like language and economics, and campaign rules.

The one glaring downside is the loud, garish formatting. Keywords are bold and ALL CAPS (which there are a lot of), and stats (artifact, mutation, monster, etc.) make use of a lot of confusing and redundant abbreviations. Also, if you like to play mutant plants, the rules do not cover them.

The game came in a box set containing a 64 page rules booklet, a 32 page adventure booklet, a full-colored map with US on one side and Pitz Burke on the other.

This edition had four accessories:

The 1985 third edition rule set was noted (and infamous) for making use of the Action Control Table (ACT). This table was a color-coded chart, introduced in the Marvel Super Heroes role-playing game, that allowed players to determine degrees of success with a percentile roll. (At the time, TSR thought in was a brilliant system, and tried to include it in other games, like Star Frontiers and Top Secret.)

This edition suffered from a number of editorial mistakes, including cross-references to rules that didn't appear in the boxed set. The missing information included the cryptic alliances, plant mutations, price lists, and equipment. The errors were serious enough that TSR published a 16-page rules supplement containing the omitted rules.

The game came in a box set containing a 64-page rulebook, a 32-page adventure book with a full-color detachable cover containing a map on one side and the ACT chart on the other, a 16-page coverless reference book, a tri-fold referee's screen, and a double-sided fold-up map of Pitz Burke and Allegheny.

This edition had five accessories:

TSR dropped the 3rd edition of Gamma World from its product line before the multi-module storyline could be completed. In 2003 an unofficial conclusion to the series was published under the title GW11 Omega Project.

The 1992 fourth edition rule set by Bruce Nesmith and James M. Ward abandoned the ACT system in favor of mechanics derived from the Advanced Dungeons & Dragons 2nd Edition rules. The rules are extensive, and includes different ways to roll attributes based in genotypes; a new attribute called Perception; animal and plant templates for mutant races; 4 playable classes (Enforcer, Esper, Examiner, and Scout) with their own specialized skills; and game mechanics prolifically similar to the AC/DC mechanics used in the third edition D&D.

This edition was published as a standalone 192-page rulebook.

This edition had five accessories:

The fifth edition game (2000), by Andy Collins and Jeff Grubb, was a 192-page setting supplement for Alternity, and requires the Alternity core rulebook to play. Since it came months before Wizards of the Coast canceled the Alternity game line, this edition did not have any accessories or supplements.

This is largely an obscure edition, but the Alternity RPG still maintains a strong cult-following.

Omega World was a d20 System mini-game based on Gamma World and written by Jonathan Tweet for Dungeon #94 and Polyhedron #153 in 2002. Tweet did not produce any expansions for the game, although it received a warm reception from Gamma World fans and new players alike.

The 2003 sixth edition was a licensed game by White Wolf Studio, and uses the d20 Modern rules. Like The fifth edition, it was no a complete rule set, so you'll need d20 Modern (or any other compatible D20 rulebooks, like Darwin's World or Grim Tales) to play, but there are enough rules to be a fairly complete game.

Unlike the wacky, soft-science nature of previous editions, this edition strides for a gritty, hard-edged sci-fi feel. This game downplays radiation as the primary means of mutation. Most of the mutant monsters in the game are noted as being deliberate inventions: As fulfilling same use in society or war, or were some escaped experiment. Few mutants are true fallout mutants. Much of the mutations are the product of mutagenic nanites or viruses. In the Sources and Inspirations form the Player's Handbook, they were more dismissive of "gonzo" works like Damnation Alley (movie) and Six-String Samurai, while citing works like The Postman, Mad Max and Independence Day as being more in line with Gamma World styled adventures. While they are fine works of fiction, this misses the mark of what makes Gamma World fun for many fans, and was not what the fans were expecting. Although, to their credit, they did recommend Six-String Samurai, Tetsuo: The Iron Man, which are both extremely wacky.

One of the key elements added was the use of nano-technology. Fluff-wise, they are clouds of microscopic machines that can alter normal matter. Crunch-wise, they are an interesting placeholder for magic-use. Nanites can alter normal matter (living and inorganic), alter gravity, project energy and force, create sensory stimulation and beyond. The rules for nanite-manipulation includes Difficulty Classes to manifest them, and Nano Costs to get them to take effect.

The game also list rules of cybernetics, with added rules for energy charge and consumption, as well as linking them to items. To make them useful without major surgery and specialized medical knowledge, they are made in a way were almost anyone can install them on effected areas (this is were the influence of Tetsuo comes into play).

Races are called genotypes. Players can play as one of two un-mutated humans: Stock Humans (the most common) or Pure-Strain Humans (isolated prewar people). You can choose from four types of mutants: Engineered Animals, Engineered Humans, New-Men, and True Mutants. The first two where engineered prier to the war, while the last two where the product of the aftermath of the way. Synthetics comes in three flavors: Androids (human-like robot with an AI), Cyborgs (machine covered in living tissue) and Robots. Classes follow the d20 Modern standard: Strong, Fast, Tough, Smart, Dedicated and Charismatic heroes. Advanced classes includes: Cybercologist (someone with a mental and emotional connection to synthetics), Leader, Nanosmith (like a Wizard, but with ), Prophet (more a rabble rouser with good insight than a spiritual clairvoyant), Survivor, and War Chief. Everything else, is covered like a d20 game, with backgrounds, skills, feats, wealth score, reputation bonuses, equipment, and so on.

The 2010 seventh edition — officially: Gamma World Roleplaying Game: A D&D Roleplaying Game — is often called "4e Gamma World", as it runs on the 4th edition "4e" D&D rules. This game is unique for its collectible card game component. Characters are given random cards for mutations (Alpha Mutations) and loot (Omega Tech). This would be good, if it was done right. With how the game is played, mutations change after each encounter. As a collectible card game, you start off with a basic set of cards, but to get anymore cards, you'll need to buy a "booster pack" of 8 random cards. Trying to collect the whole set will get pricey. As 4th edition D&D is fundamentally geared towards "Beer and Pretzels" miniature combat, you'll need battle maps and miniatures or tokens to represent the combinations.

The Treasure Charts in first edition Gamma World (a list of common junk fond in the pull-out sections at the end of the book) notes some notable objects:

Retrieved from "https://mutant-future.fandom.com/wiki/Gamma_World?oldid=5920"
Community content is available under CC-BY-SA unless otherwise noted.