Mecha (plural and singular; also called Mechs) are giant, piloted robots, akin to what you see in a lot of Japanese animation. They came in a wide range of shapes and sizes. They can look like humanoid robots, or even animals. Some can transform into another shape — like vehicles or animals (this is called "alt mode" or "alt-form") — or even combine with other mecha to form something larger — this is called a "combiner", "gestalt" or "amalgam". In most cases, these machines are built for combat, but there are exceptions to this (e.g.: horse-like mecha are used in real-life by lumberjacks to move into hard to reach wilderness area while minimizing the impact of their treads on the environment).

Creating a Mecha is not too hard, as they are built on a robotic frame. What makes them different form robots, is that they have cockpits, and attack based on the pilot's ability (they still have Mental Programing to help control the machine's many servos and sub-systems, but they usually have Programed intelligence). Mecha use the same stats as robots, but also includes Controls:

Basic controls are simple joysticks and foot paddles, with a set of screens (for enclosed cockpits) or HUD displays (for windowed canopies). This control system is basically an elaborate video game system, and the pilot lacks the reaction speed and fine-point manipulation found with more advanced controls systems. Pilots usually have to move or attack in a round. Due to this limit, its not usual to have mecha with two or more pilots (Driver, Gunner, Commander, etc.) This type of control is the default assumption for most old-school anime mecha, and western mechs.

Virtual controls remove the typical sitting cockpit, for an enclosed pod, that requires the pilot to wear a tight datasuit so the machine can read the pilot's body movements, and react accordingly (allowing the use of the pilot's Dexterity adjustments and attacks per round). The Pilot can see through the machine's sensors with displayed built into the helmet. This is like what you see in Robot Jox, G Gundam or Pacific Rim. This has the benefit of impressive control, but downside is that most of the sub-systems (weapons and accessories) are voice-activated to keep the mecha from mimicking the pilot's button pressing. Basically, the pilot cry out attack phrases like a Power Ranger. This type of control is ideal for the types of light, acrobatic mecha seen in current anime, as well as any piloted "Bayformer" mecha, one might confuse for something form one of the live-action Transformers movies.

Neuro control systems links the mecha directly to the pilot's brain. It works much like Virtual controls, but its all internal, and takes up less space (based on the setup used). This system can vary greatly; being as simple as the neuro-impulse helmet you would find in Battletech, or something more elaborate, like the "plugs" form Evangelion. The downside of this system, is that damage to the machine could hurt the pilot with a nasty neuro-feedback surge (save vs Stun to avoid taking half damage), and AI programing (if used) with strong egos or conflicting goals can interfere with the pilot's operations and focus (save vs Stun to maintain control). The capabilities of an AI programing (to-hit bonuses, est.) maybe stacked with the pilot.

Powered Armor Mount is a special mounting that allows a Powered Armor suit to attach and linkup to a separate robotic vehicle servo called a SLAVE unit (see below). They have no cockpit, and the suit is usually exposed for quick release.

A basic cockpit setup seen in most mechs 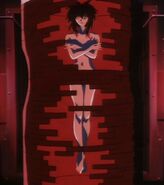 Ejection Seat/Pod: This system ejects to pilot out of the cockpit (or the whole cockpit) in case of an emergency (save vs Energy Attack for a successful escape).

Transformable ([alt mode]): The mecha can transform into another type of vehicle or mecha. It take a round (sometimes more) to transform. A mecha in mid transformation is in a helpless state, and counts as blind. A mecha may have any number of "alt modes", but one is the most common, and it rarely goes past two. Alt modes usually have completely different stats then the primary mode, but generally keep the same size (unless you are playing them like the wonky '80s Transformers cartoon). Damage to the mecha would effect its alt-mode, if not impair its ability to transform.

Combiner Link: This system allows the mecha to transform into a part that makes up a larger mecha (the transformation is apart of this accessory). All units that make up the combined form must be present and in working order to successfully combine. The final mode would have its own stats. It takes a round to transform, and another round to from together.

A combiner linked mecha is ideal for mecha with basic controls, as the pilots can focus more on controlling individual systems (arms, legs, weapons, etc.), with one of them serving as a commander. This gets more awkward with virtual or neuro control systems. When such systems are used with a combined form, the pilots need to ether be highly coordinated like professional dancers (in case of virtual controls), or in total agreement with desires and objectives (with neuro controls), or else the mecha would not operate properly.

S.L.A.V.E. (Servo-Linked Actuated Vehicular Engine) units are like robotic vehicles that attach to the back of a Powered Armor suit. The purpose of a S.L.A.V.E. is to provide more power, grater range, and more equipment to a combat suit. They look like a platform mounted on some sort of locomotion, equipped with weapons or equipment (tool arms, radar dishes, and such), and all built around an armored soldier. They usually mount force fields, so the suit don't have to use it's own.

Fire-support Sleds mount heavy support weapons on a set of tank tracks. While they lack the speed and mobility of most combat armor, they mount the sort of weapons that can support front-line troops.

Engineering Sleds are like Fire-Support Sleds, but mount a number of work arms and attachable tools, instead of heavy weapons. They also mount storage bins for tools and equipment.

Speeder Sleds resemble a catamaran, and the suit stays aloft with anti-gravity inducers and thrusters. They do not add much operating time to the suit, but they allow it to run faster, and to jump higher and farther. This unit is used to make fast attacks. Variations of this unit includes medevac, and electronic-warfare carriers.

Sapper Sleds are like Speeder Sleds, but are built for combat engineering. They are design to move into a site quickly in order to effect repairs and construction under battlefield conditions. A civilian variation is built for emergency search and rescue operations.

Spyder Legs are special set of long, spider-like legs that end in retractable claws. While retracted, the claws works like casters (spherical wheels) for movement on ground or on metal walls (do to kinetic drivers), and the claws can be extended for climbing and grabbing. Grapplers maybe fired to circumvent obstacles (similar to the adhesive string shooters used by the Tachikomas in Ghost in the Shell). The grapplers can latch on by hooks or by magnets. They are quite stealthy, and are generally used in urban environments.

A variation -- called the Rock Spyder -- replaces the kinetic drivers for thick rubber padding over the casters, to allow for travel over rugged terrain, and removed the magnetic grapplers for more robust hooks. This variation was built for traversing rough terrain and for planetary exploration.

Jet Sleds are a set of booster jets and wings. They essentially turn an armored soldier into a small jet fighter.

Community content is available under CC-BY-SA unless otherwise noted.