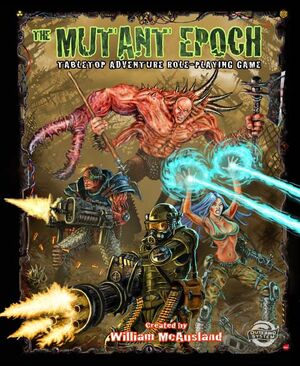 Mutant Epoch is a post-apocalypse role-playing game by Outland Arts, and written by William McAusland.

The game uses the Outland System game mechanic. It uses a range of polyhedral dice, but the d100 is used for most rolls.

There are 8 attributes (called traits):

Character types include the following:

Clones — Copies of specific humans, born either in machines as adults or surrogate mothers.

Mutants — From the mildly deviated to freakish horror mutants.

Beastial Humans — (Also referred to as Mutant Animals) Half human, half animal hybrids.

In combat, players uses the character's Strike Value (SV), minus the target’s Defense Value (DV) to get a resulting target number. A roll equal or less to the target number on a d100 roll hits the target. Damage is inflicted on the victim and deducted from its Endurance value. When a being reaches zero endurance, it is incapacitated, but depending on its overall size (starting endurance) it may only be unconscious, slowly dying or outright dead.

While a game master could take whatever sections of the TME rules and create his or her own setting, at any time in the future, The Mutant Epoch, as published, takes place in the mid 27th Century a couple of hundred years after the collapse of the former civilizations. It is a new dark ages for humanity, where might is often right, where nature has become twisted by ancient human science and accelerated evolution, where people live in small, often remote communities, fearful of strangers and growing eccentric in their isolation. It is a time when only a few hard pressed townships have formed factions, often in response to some external threat, where communities have taken on a more or less feudal system, employing technology more reminiscent of medieval Europe, mixed with the highly prized relics left behind by the ancients. In places, digger towns have emerged on the edge of great ruined cities of the oldsters, where daily expeditions by excavators pierce the dangerous junk heaps in search of wondrous treasures, as well as answers as to how and why the civilization of the old ones ended.

Beyond the relative safely of the scattered towns, are the vast wilds and shallow seas, broad wastelands where ancient battles took place, impenetrable woodlands, stinking swamps, badlands and great dune wastes. All of these areas are littered with the remains of dead cities and installations, and rusted machines of war, often buried under meters of ash or compacted mud and rock, but at other times, protruding kilometers into the sky in vast urban ruinscapes. Everywhere, newly evolved plants and animals, which seem as hostile and merciless as the landscape, wait to devour the unwary, the slow or the weak, even as emerging clans of fierce sub-humans and man-killing machines claim their own domains, and plot annihilation of the old kind, the humans, and their off-shoots.