Robots are the mechanical slaves of a bygone age. They range from simple remote-controlled vacuum cleaner drones, to highly-complex, building-sized AIs that maintain whole cities.

[for household, medical, and commercial robots] 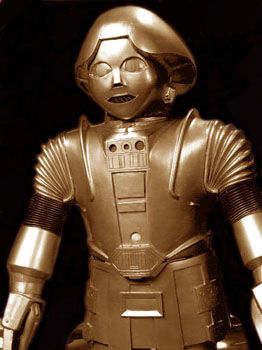 These 3-1/2 foot tall humanoid robots were originally designed as mechanical miners but proved so versatile that they were adopted for less blue collar uses, including office and government service. Not truly intelligent, an ambuquad’s advanced software enables it to be re-programmed on the fly by vocal command. Because of this, models tend to repeat often-heard phrases at seemingly appropriate moments and can develop quirky “personalities” over time. 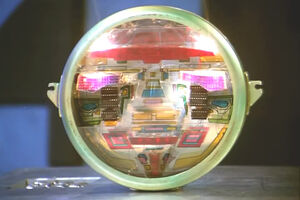 After the Crisis, some surviving artificial intelligences were left to run government installations or municipal power and defense grids on their own. Nearby human survivors depended on them to do so, lacking the knowledge and skills to interfere. The computers maintained or developed a leadership role in the communities that relied on their services.Over time, these intelligences learned to program themselves, to enhance their capabilities via automated manufacturing facilities, and to contact and communicate with other computers that were still functioning. This electronic association evolved into a “computer council” of linked artificial intelligences working to ensure the survival and well-being of people within their jurisdictions, relying on obedient human bureaucrats and police to enforce their will. The Council became the de-facto government of the communities under its care, controlling among other things trade, diplomacy, urban planning. Although outsiders may question a society where people allow machines to think for them, those within the Council’s domain rarely do so, having long since traded freedom for relative order, security and prosperity.

Currently, a typical councilmember AI is a compact, self-contained electronic structure resembling an 18-inch diameter translucent mantel clock with lots of blinking, glowing lights inside. It is equipped with a carrying strap or harness enabling it to be transported by a human or ambuquad bearer. Councilmembers have long memories, big egos, and distinct personalities capable of expressing emotions. Whether that personality is arrogant, paternal, or irritatingly reasonable, a councilmember isn’t used to be disobeyed or thwarted by humans. It will remember adventurers who do so and may regard them as a threat to those under its care. It will invariably justify its decisions as being for the greater good.

Both the Ambuquad and the Councilmember AI write-ups are based on the 1979 movie and television show Buck Rogers and the 25th Century.

[for industrial and heavy labor robots]

[for combat and security robots]

Volkites are armored robot shock troops that can operate either autonomously or via remote control. They are impervious to most conventional small arms and carry “atomic” rifles. Volkites can be deployed singly but more commonly operate in pairs or quartets.

A typical trooper is a 7-foot –tall humanoid of the “tin can on legs” variety popular in the 1920s and ‘30s, heavy on the rivets and metal plating. It has bulky “shoulders” where a human’s neck would be, from which extend flexible segmented “arms.” A rectangular sensor array sits where a human’s eyes would be, and armored conduits extend from the body to the conical top of the “head.” It walks with a slow, determined shuffle.

Because of their configuration, volkites have a high center of gravity and tend to be top heavy, their primary weakness. A successful DEX ability check might enable player-character marksmen or pugilists to knock a volkite off its feet even if they can’t pierce its armor.

From Undersea Kingdom, Republic Pictures (1936). No copyright infringement is intended.

(just dump stuff here, to be sorted out later)