This page is dedicated to the androids and robots featured in the Terminator franchise. It covers Hunter/Killer Drones, Infiltrators, Terminator-Hunters, etc. 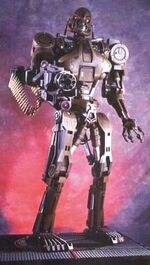 The T-70 was the first Terminator with a humanoid form. The model was based on the wreckage of the T-800 that was destroyed in a Cyberdyne factory in 1984.

Standing eight feet tall, more than four feet wide, and armed with an advanced (for it's time) model Gatling gun, the T-70 Series was built to form an imposing sight on the late 20th Century battlefield, rather than being designed for infiltration. Due to their antiquated construction and blueprint, Skynet has not produced T-70’s for about the past 30 years (since 1999). However, there are still rare reports from some of the Outer Rim territories of T-70 activity, and it is alleged that T-70s are still used as executioners in the human death camps.

The T-70 Infantry Unit was originally a controlled unit. Skynet, using T-70s as its eyes and ears, remotely controls these units. They rarely use their weapons to execute prisoners and are unaccustomed to complicated tactics. 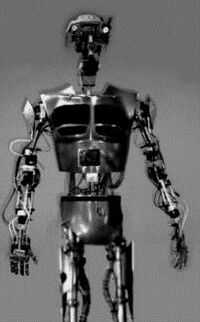 Slow, unbalanced, underpowered, and easily defeated, the T-200 soon came to be known to Tech-Com as a "Stickman" or "Tin-man" due to its narrow, inhuman shape and large sensor array atop the shoulders. Armor was light on such a narrow frame, and redundant systems were almost non-existent ensuring that any critical damage would cause the combat loss of the unit. The unit was a quick and cheap stopgap measure, a model designed to provide Skynet time to implement more efficient designs. Hyperalloy materials were just being developed by Skynet so the T-200 was armored with more primitive ceramic materials and even crude ballistic cloth, giving a tattered, ragged look to the unit which generated an additional name from some of the Tech-Com units; "Scarecrow."

The T-200s advantages include mobility, target following capability, infiltration capacity, and the ability to operate and use Tech-com equipment and weapons. It has quite a few disadvantages however. A good hit from large caliber, small arms fire can cripple or destroy a T-200 unit. The sensor array is particularly vulnerable and Tech-Com units have quickly discovered this weakness, using a variety of close combat and long ranged sniper based attacks aimed directly at the delicate sensor array. T-200 units that have their sensor array damaged or destroyed either shut down and stand in place, or short circuit and walked around, bumping into buildings, debris, etc. until Tech-Com destroys it or the fourteen day endurance power cell is depleted. Tech-Com actively forms hunting groups to venture out from the ruins, to hunt T-200 units in order to steal weapons and ammunition, even the crude armor. The T-200s are such easy kills that Tech-Com snipers in skyscrapers can destroy a patrolling T-200 and in a matter of less than a minute, street scavengers will pick the unit clean of any usable parts and equipment.

The Series 400, T-400, or Clankers due to the distinct sound produced when it walks, is one of the early Humanoid Hunter Killer Unit series prior to the Series 500 Terminator, and were first created in 2018 by Skynet.

The T-400 was invented during initial tests to mimic human autonomy. The idea was to create a Hunter Killer that had the general size, shape, range of motion and mobility of a human being. The hyper-alloy construction and armor of later series was not perfected during this time, so the 400 Series' construction was made from cheap and not particularly durable materials, that were easy and fast to produce and put into the field. Due to these reasons, Skynet kept producing the 400 Series en masse as expendable soldiers even after newer Humanoid Hunter Killer series were created, such as the T-500 or T-600. The 400 Series served as the main ground-troops shortly after their creation, and some were used as guards at different skynet installations, factories and internment camps, where human prisoners were held.

The T-400 were one of the very first Hunter Killers that utilized true artificial intelligence, but their actual intelligence were fairly low. They could only follow simple orders, tend to fall of cliffs, and their actions and tactics were predictable. Unlike earlier humanoid models, the had the balance to right themselves after falling over, did not shoot other Terminator units. Their shoulder-mounted senor is exposed and gives off a bright red light, thus allowing sharpshooters and snipers to blind them with one shot (at AC 8). The senor offers no depth perception (all range attacks are at -2 to-hit).