The Apunkalypse is a name given to a genre of post-apocalypses highlighted by deserts, lawless bands of leather-clad bikers, and with cars and motorcycles modified into "rat rod" styled combat vehicles. Basically, Mad Max and the Road Warriors and everything that came of it.

In this genre, modern civilization collapsed giving way to an age of lawlessness. The land is barren, food and clean water aro hard to come by, and life in general is harsh and short. There are those who are trying to rebuild civilization, but most are just trying to survive, and there are no shortage of bandits and despots who prey upon the weak. As morality is mostly cast in grays, alignment in this genre are based less on morality, and more on adherence or defiance of authority. As the fall of civilization usually happened in the modern era, technological artifacts are limited to modern technology, with the occasional super-rare high-tech prototype, if at all.

This genre, played straight, is a poor fit for Mutant Future, as Mutant Future, being based on Gamma World, played as a fantasy akin to what you see in the Silver Age of Comic Books (comics form the 50s to '60s). In that age, comics treated science like magic, and played loose with physics. Inventors could build inter-dimensional portals or time machines out of junk. Exposure to high-level radiation can turn a man into a hulking green brute, instead of a dying chunk of cancerous meat. Characters were also larger-than-life, able to achieve deeds akin to an '80s action star, without concern to long-term survivability; the need maintain a proper diet, the risk of infection form injuries, etc.

The Apunkalypse genre can compliment the default genre of Mutant Future, or nearly any genre for that matter. In Cyberpunk 2020, much of America is a wasteland populated by roving gangs and families of Nomads. The wastelands of 2000 AD (Judge Dredd, Rogue Trooper, et al.) is even harsher. The grim future of The Terminator franchise is an Apunkalypse with a powerful and pervasive adversary: Skynet and it's relentless robotic army. The Zombie Apocalypse often crosses into Apunkalypse fiction. Fist of the North Star is a Street Fighter II-like anime and manga setting set in an Apunkalypse future. If You flood the Earth, you'll get an "Ocean Punk" future, much like Water World — basically an Apunkalypse but with motorboats.

A party of Apunkalypse adventures 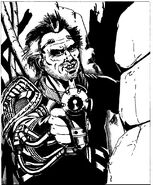 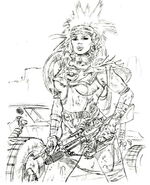 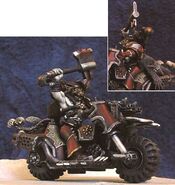 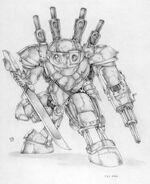 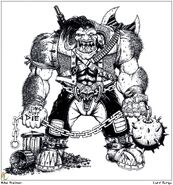 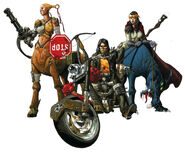 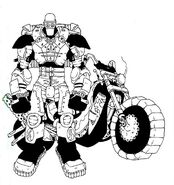 An armored biker
Community content is available under CC-BY-SA unless otherwise noted.
Advertisement